This past week, Kelly Barta and I attended the International Investigative Dermatology Conference in Orlando, Florida. Kelly is the new President of ITSAN, the International Topical Steroid Addiction Network. We had met on two other separate occasions, so I trusted the week would be filled with both fun and advocacy.

On Wednesday night, we entered the Rosen Creek Hotel dressed in our best and hoping to mingle. To say the conference was packed is an understatement. Doctors and researchers from around the world were stuffed into the open buffet and bartended area, chatting and greeting old friends. We figured out there must be around 3,000 people present. Our mingling strategy was a no-go since there was not much opportunity to interject into already matured conversations between colleagues. We however caught up amongst ourselves and shared our thoughts of what we expected, what he hoped would come to pass, and how to best utilize our time at the conference. Kelly had already set up a fabulous booth in the poster presentation room and all we had to do now was make an impression.

Thursday was our first long day of the ‘marathon’. With Kelly being such a warm and intelligent conversationalist, I would leave her to man the booth while I attended some of the smaller poster sessions and mini symposiums. I was interested to see what else was happening in the field of dermatology surrounding the skin (that perhaps could intersect with our advocacy). There were LITERALLY over 1500 posters being showcased, all with different research topics. Quite overwhelming for an onlooker who didn’t understand every facet of research or jargon being used. The only place I felt confident was at the Atopic Dermatitis presentations.

That night, before the IID shuttled us off to The Wizarding World of Harry Potter, we had a large lecture on Pathoimmunology and Management of Atopic Dermatitis. There were 4 different speakers: Emma Guuttman-Yassky, Jonathan Silverberg, Eric Simpson, and Amy Paller. They are some bigger names in the AD community. Many topics were discussed during this blocked period, most of which were echoed and further looked at in other sessions. One is the two main categorized causes of AD: The INSIDE-OUT, and the OUTSIDE-IN. The former comes from a Type 2 response in the body (like allegories) and all the different IL pathways. IL stands for interleukin, which are certain glycoproteins responsible for immune response. There are many ILs that seem to play a role in AD and other autoimmune issues, such as psoriasis. The latter cause stems from our epithelial barrier and innate immunity– things like filaggrin, which are what help seal out allergens and irritants from entering our bodies.

One huge element I took away from the lecture was “AD (atopic dermatitis) IS REVERSIBLE AND IMMUNE DRIVEN”. That word, reversible, is a word filled with hope. So many patients have heard doctors tell them that they will be on steroids for the rest of their life because eczema is incurable. But, if we can find a way to reverse the damage, it will be a day of joy. I truly hope in the next decade we find out how little we will ever need to prescribe steroids since we will have found safer and more effective drugs that target the causes of our symptoms, not just the symptoms themselves.

At one point, when they were discussing statistics (adults with A.D.: 7%/Children: 15-20%), they were not sure why A.D. was becoming more persistent into adulthood. All I could think in my head was: steroids. If patients are being treated constantly with steroids, some are sadly going to be in the steroid-induced eczema column. They also gave statistics on our lack of sleep and teetering concentration throughout our work days. 90% of sufferers said they experience sleep loss 1 night a week. 50% said they experience sleep loss 5 nights a week! What a large number!

The hottest topic however was new treatments being studied or already in trial for helping relieve patients with atopic dermatitis. The one we already have available in the United States is Dupixent (Dupilumab), which is an injectable treatment that targets IL 4 and IL 13, two culprits in AD inflammation. They are seeing it help around 50% of patients (noticeable to massive improvement), and studies that even show improvement in filaggrin production.

So many!! And these are just the monoclonals (or also known as biologics). You may be wondering why we have so many IL targets that differ, and it’s because not only can many play a role, but different ethnicities have issues with different ILs. One drug may work wonders for one person, but it may not help another very much. Doctors and researchers are doing their best to tackle this puzzle.

Something I did not enjoy hearing about with these trials however is that many allowed steroid use. So, when you see the number 68% in the placebo group, it’s not because it was just a psychological improvement, but because they were using steroids when needed. How are we supposed to know the efficacy of a drug by itself if steroids are also being used in tandem? Not all trials but too many to count are allowing this. Nevertheless, it still seems to be helping some individuals who are now off of steroids because of it. That is a plus.

Another stellar branch they are trying to utilize is bacteria. It has become apparent that Staph aureus (Staph au.) plays a part in irritating atopic patients. Many doctors present spoke about the need to keep antibiotic-resistence at bay, so this new study (hopefully going to be conducted within this year) is going to be using good bacteria to try and combat the bad bacteria. Different strains of bacteria are able to fight against Staph au. and a couple in particular will be in the trial (I am not sure exactly the one that will be in the trial, but I believe it will be Staph hominis or Staph epidermidis). Exciting times!

At the end of the lecture, Eric Simpson allowed us to partake in an electric quiz. He gave us a scenario and then asked us (mind you us meaning a room mostly consisting of AD dermatologists or researchers) to answer a few questions surrounding what treatment route we would take for the patient. So, this patient in particular had used plenty of steroids, the scenario even including that he had taken oral rounds of steroids. Now, this patient is coming to see you — Your first step at the new office would be?

The majority of us (including myself) put B — patch testing. However, 16% answered they would do ANOTHER round of orals. Right there, in that room of maybe 100 people, that many jumped straight to the easy go-to that was obviously NOT working. It blew my mind since the % for answer “a” should have been 0%.

Then, he gave us a new scenario (I can’t remember all the criteria), but his first question was “You think the patient has AD. Your first line treatment for this condition would be”: and 58% stated topical steroids. It is still very much the go to, first line treatment. I was sad to see this, but this is what is taught. And it doesn’t make me sad because I think steroids are evil — that’s not my thought process. It makes me sad because when they are given steroids, it is most likely going to be for a much longer prescription than advised by the FDA guidelines (which is around 2-4 weeks of use). However, I was pleasantly surprised/perturbed by the next question: “He fails aggressive topical therapy, what is your next form of treatment?” Great, right! He is saying if the patient fails the first prescription, you move onto the second and not keep the patient on steroids forever! But, vaguely, what does “aggressive” therapy imply? Quick but super potent dose? Excessive use of steroids at different potencies? That part did catch me off guard. And his answer for the question was Phototherapy. I wish that would be considered as first line treatment and not steroids — but it can be impossible for a patient to do since it requires coming in 2-3 times a week for a short burst of UV treatment. Inconvenience, cost, and slower progression in skin repair is NOT what we want (or can sometimes even have as an option). We want the RIGHT NOW, which is steroids. They are quite the temptation. But that was the ending of the conference day, educational wise.

During the day on Thursday, while I was out scouring the posters and soaking up as much lecture information as possible, Kelly did a stellar job networking! I am in awe of her skills. She has a knack for starting conversation and speaking fluently with any stranger. She was able to talk with a few different doctors who were aware that steroids were not the chronic bandaid patients should be dawning, and thankfully she had a wonderful talk with two women from the Psoriasis group! Plus, a plethora of individuals came by the table checking out ITSAN case studies printed out in a binder, ITSAN brochures, and even USB drives with the case studies loaded on them. I’d say it was a pretty successful Thursday! Plus… Universal Studios! 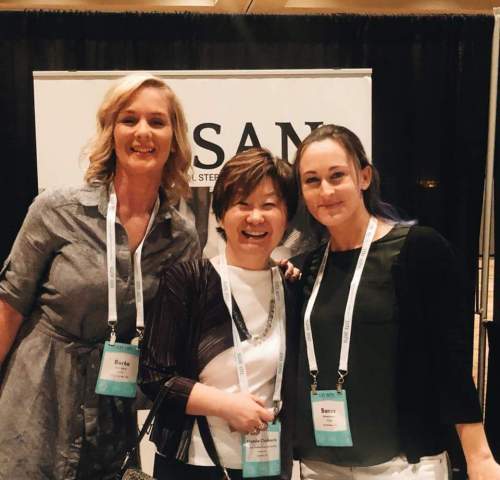 (stay tuned for Friday and Saturday)

Also, I am not on ITSAN’s board and do not speak on their behalf. We are both advocating for the same cause and I am honored to be working beside them in raising awareness.

Follow PREVENTABLE: PROTECTING OUR LARGEST ORGAN and stay updated with new information regarding our fight to prevent Red Skin Syndrome and bring reform to topical steroid use.

Preventable: Protecting Our Largest Organ is fiscally sponsored by Creative Visions Foundation (CVF). CVF is a publicly supported 501c3, which supports Creative Activists who use the power of media and the arts to affect positive change in the world.